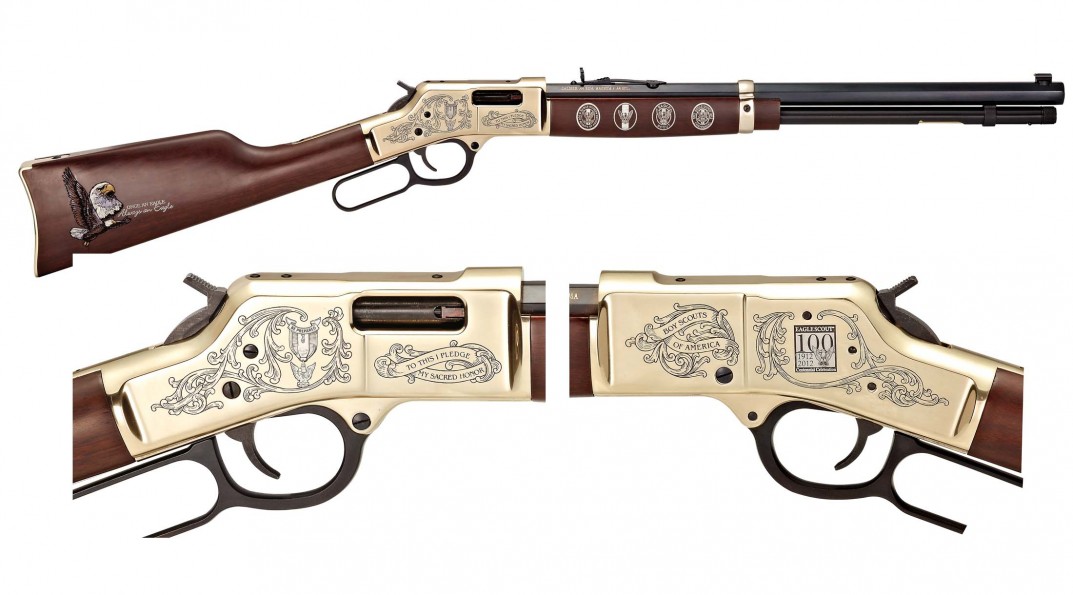 Henry Repeating Arms Company is pleased to introduce the Henry Big Boy Eagle Scout® Centennial Edition Rifle officially licensed by the Boy Scouts of America. This commemorative rifle celebrates 100 years of the first Eagle Scout Award and the more than two million Boy Scouts who have earned this privilege and honor.

To showcase this historic milestone, each Henry Big Boy rifle is etched with the Eagle Scout® Award Medal and selectively nickel plated on the right side of the receiver with an American style scroll pattern bracketing the medal and the banner with the words “THIS I PLEDGE MY SACRED HONOR.” The rifle will have a limited initial production run and each one will be numbered.

On the left side of the receiver the BSA® Eagle Scout 100th Anniversary commemorative logo is etched with selectively nickeled plating. The American scroll pattern and a banner with the words “BOY SCOUTS OF AMERICA,” are also etched on the receiver. Into the right side of the American walnut stock is laser etched and hand painted in multiple colors rendering of a soaring eagle, a Bald Eagle with an enduring gaze, and the words “ONCE AN EAGLE ALWAYS AN EAGLE;” On the forearm’s right side are four Eagle Scout badges, representing the design changes of the badge over its 100 year history, are lasered into the American Walnut wood and hand painted in a nickel coloring.

This special Henry Big Boy Eagle Scout® Centennial Rifle is a symbol of American Pride, a reminder of youthful success, and the ongoing commitment as an adult to the ideals of the Scout Oath and Scout Law.

All Henry Rifles are authentically produced and assembled in the United States by American craftsmen. Henry Rifles, a symbol of quality, are known for their reliability, accuracy and value as well as having the smoothest engineered actions in the land. Henry Rifles are an historic piece of America, and like the Eagle Scout Award, a symbol that has surpassed the test of time.